Our Inventory Lists are meant primarily to provide you with an indexed link to our privately held manuscript archive. However, many of our entries come from a miscellany of published works, including long out of print items such as books, booklets, ephemera, handbills, magazines, newspapers, pamphlets, postcards and photographs.

The majority of our information centres on Scotland, but please note that we have a small but useful collection of research material relating to other parts of Great Britain, as well as other regions of the world. Many entries are of a commercial or business nature, and we also list named properties such as farms or estates, as well as listing specifically numbered buildings in urban or built up areas. We also have a small number of entries relating to subjects such as royalty and the British aristocracy, local and national organisations, as well as items to do with shipping and the armed forces.

Most of our records predate 1900. However, 20th century entries are listed up to approximately 1950, where it is known that the person concerned is no longer alive. Other exceptions include commercial and assorted organisations, or individually named or numbered properties, which in general are indexed no later than about 1960.

The following vellum Burgess Ticket is an interesting example of the type of document that has been comprehensively indexed and included in our listed datasets. As can be seen from the text, this one item alone contains useful genealogical data about some of the worthy citizens of the Royal Burgh of Dumfries in the 18th century. 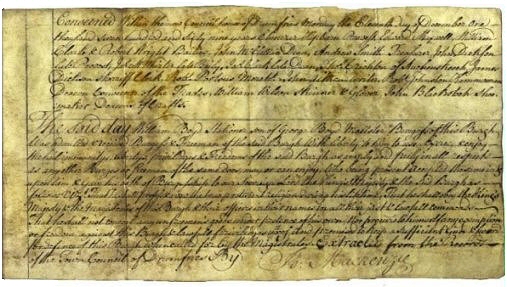 Conveened Within the new Council house of Drumfries Monday the Eleventh day of December one - thousand seven hundred and Sixty nine years Ebenezer Hepburn Provost, Edward Maxwell, William Clark & Robert Wright Bailies, John McClellan Dean, Andrew Smith Treasurer, John Dickson late Provost, Jas. McWhirter late Baily, Jas. Clark late Dean, Thos. Crichton of Auchenskeoch, James Dickson sherriff Clerk, Robt. Portous Mercht. John Aitken writer, Robt. Johnston Hammerman Deacon Conveener of the Trades, William Wilson skinner & Glover, John Blackstock shoe maker Deacons of Crafts. The said day William Boyd Stationer son of George Boyd Malster Burgess of this Burgh, Was admitted & received Burgess & Freeman of the said Burgh With liberty to him to use, Exerce, & enjoy the hail immunitys, libertys, priviledges & Freedoms of the said Burgh as amply and freely in all respects as any other Burges or freeman of the same does, may or can enjoy, Who being present accepted the same in & upon him & Gave his oath of Burgesship to our Sovereign Lord the King's Majesty & the said Burgh as follows vizt. That he shall profess & avow the true protestant religion during his lifetime, That he shall obey the King's Majesty & the Magistrates of this Burgh & their officers in their names in all their just & lawfull commands That he shall not conceal any unfreemen's goods under pretence of his own, Nor procure to himself any exemption or freedom against this Burgh & lawfull priviledges yrof, and promised to keep a sufficient Gun & Sword for defence of this Burgh when called for by the Magistrates. Extracted from the Records of the Town Council of Drumfries By Jo: Mackenzie